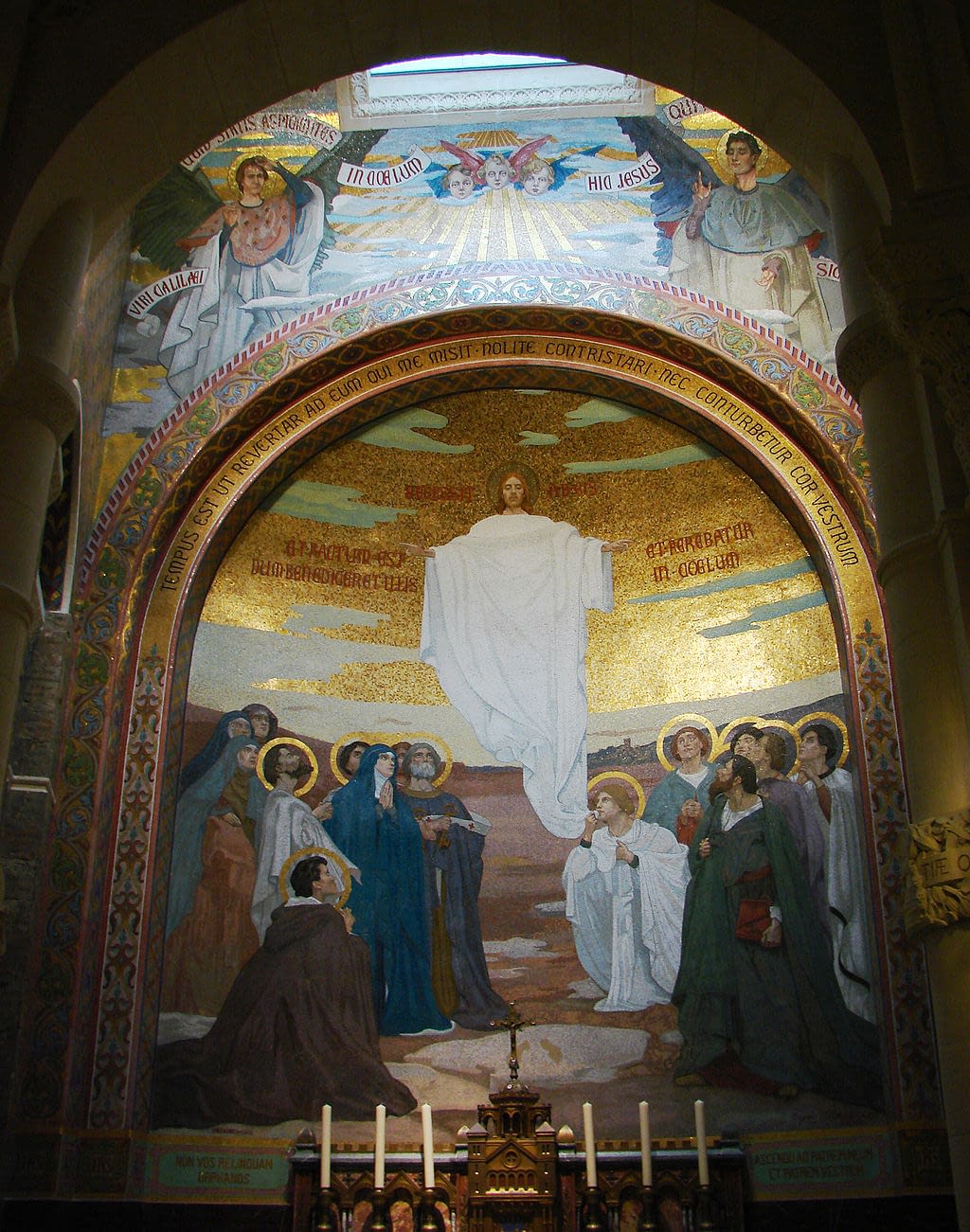 We’ve been deprived of the medicine of immortality for over two months now, faced locked church doors unable to visit our Lord in the tabernacle, and have had the great silence of adoration with Jesus in the Eucharist taken away.

He’s not absent outside of the sacraments, though, but this harsh reality should have caused some profound thinking and prayer. We should be experiencing the truth phrased perfectly by Saint John Paul II in his 1984 homily at Jarry Park, Montreal: “To replace God is an impossible task. Nothing can replace the emptiness of his absence…”

The severe restrictions placed on us to stop the spread of SARS-CoV-2 (Covid-19) should have stirred some reflection on death’s door through which we travel to the fullness of life.

Yet the media-driven Covid-19 program has been fixated on getting through the epidemic, returning to normal and thus securing a foothold in this life.

“ Once again in the history of our Archdiocese, we are in the midst of an epidemic. At this time, when we are reminded of the brevity of life and of our own mortality, we are called to go deeper to our spiritual foundations.

Seventy is the sum of our years,

or eighty if we are strong;

Most of them are toil and sorrow;

they pass quickly, and we are gone.

I’ve listened to Cardinal Collins hold fast to his Covid-19 message in his homilies. He plucks three strings of his heart’s desire: live with a profound love of the risen Lord, protect each other from the virus, and contemplate the shortness of life with our eyes fixed on our true home.

During the Easter Vigil, he reflected on life’s brevity, saying our life is very short, at whatever age we live, with a “beginning and an end when we lift off from this world, and we’re called to think seriously about that these days, and I hope it smartens us all up.”

So with most people focused on the risk of the coronavirus killing us it’s good to consider where it ranks in the list of things that do kill us. I’ve been following the stats from sites like Our World In Data, Johns Hopkins University and Medicine, and Esri Canada.

To date here are the numbers on Covid-19:

Let’s compare the death rate from Covid19 to that of other diseases. Our World In Data is one of the best sources of accurate information. We’ll look at what’s killing us based on their research.

At the top of the list you see, without surprise, Cardiovascular disease and Cancers ranking 1 and 2 respectively.

COVID=19 is not listed, of course, so I’ll use numbers based on the current trend. Since it appears that cases are reaching a plateau let’s presume that the current number of cases will continue for another 11 months.

That’s a real cause for a vigilant response to the Covid-19 spread. However, the 3.7 million deaths we used for Covid-19 won’t happen since it’s unlikely that our presumption will hold.

What should shake our thinking is the top two killers, Cardiovascular disease at close to 18 million and cancers at 9.6 million.

Based on the impact of Covid-19 on every detail of daily life everywhere in the world it’s very hard to justify some of the outrageous restrictions made by health officials and governments if we consider what player is the most deadly.

Here in Renfrew County, for example, all churches have been locked, no one has been allowed to go to adoration or Mass, and no effort has been made to apply some sensible rules to tailor the lockdown in the largest Ontario County with one death and 15 confirmed cases, 14 of which have “been resolved” as reported by the Renfrew County and District Health Unit.

During my teaching years with the Renfrew County Catholic District School Board, I experienced difficult stretches where I attended a funeral almost once a month. Some were for student family members, a staff member, and others for friends and neighbours. I also attended two funerals, one for an uncle and one for a cousin. None of those deaths were due to lower respiratory diseases shown in the charts; all were due to cancer or heart disease.

If the top killer, heart disease was contagious the world would collapse in dreaded fear. We do have a fear of cancer and heart attack and a prevention way of life has grown in the last 50 years. But nowhere close to the fear of Covid-19.

What Do We Feed Our Minds With?

What then drives us into hiding from each other? The answer is found in what we feed our minds.

Our World In data published a great piece called Does The News Reflect What we Die From by Hanna Ritchie. She describes the media’s tendency to feed us with a “near-instantaneous snapshot of single events” which sparks a sense of heightened drama tied to a negative outlook. She says, “The persistent, large-scale trends of progress never make the headlines.” The study is focused on the US and shows what we experience in reality is not what we see happening in the news.

A life lived in the heart of Christ is the strongest witness to this truth. Covid-19 has passed through Lent and Easter. The disciples, downcast and fearful because of the news and experience of Christ’s death, lived without hope, and that’s having been told by Jesus that he would rise on the third day.

Hanna doesn’t take us into the mystery of Christ’s resurrection and how it shapes our response to Covid-19, but she does provide evidence that our world is not as bad as the news makes it look.

She provides data on three things: what we die from, what we Google, and what we read in the news.

What stands out is the big difference between what we actually die from and what the media reports. For example, of the deaths considered in the study almost 60 percent resulted from heart disease and cancer, yet coverage in two major US papers amounted to about 15-17 percent.

The biggest disconnect occurred in the category of violent deaths: suicide, homicide and terrorism. When you look at media coverage on those causes of death, “violent deaths account for more than two-thirds of coverage in the New York Times and The Guardian but account for less than 3 percent of the total deaths in the US.”

What’s interesting is how the data from Google searches show that we’re not that interested in what the news thinks we’re interested in. Searches on disease showed about a 40 percent interest in cancer and heart disease, most related to cancer, compared to the relatively small amount of coverage provided by the two major papers. About 75 percent of news coverage on what kills us went to homicide, suicide, and terrorism whereas Google searches showed only a 22 percent interest.

The study shows clearly the huge disparity between the causes of death and the amount of coverage they get.

News tends to train our thinking. Given the global reaction to the spread of Covid-19, it’s easy to conclude that most have been getting their decision making information from news sources that stray from what’s actually real.

So what’s happening in the minds of Christians who make up a pretty huge chunk of the world’s population who know the most important news is the Good News.

One advantage of the worldwide ban on gatherings around the Altar of Sacrifice is the online availability of homilies. I couldn’t find any data source like Our World in Data on the numbers listening to those homilies that remind us of the sure hope in Christ who comes to rescue us.

Google sure has the search trends, so if someone decided to track them I think we’d see a staggering interest in Christ’s teaching propelled digitally. [pullquote]do not be afraid of those who kill the body but after that can do no more.[/pullquote]

When we hold our eyes on God, his mind-numbing words of consolation concerning our fears will find a central place in our antivirus program. For example, “I tell you, my friends, do not be afraid of those who kill the body but after that can do no more. I shall show you whom to fear. Be afraid of the one who after killing has the power to cast into Gehenna; yes, I tell you, be afraid of that one (Luke 12:4-5). How wonderful to hear that the One who alone has the power to annihilate us is the one who gave us life and wants us to live with Him eternally, even dying on a cross so that we might live. That’s Good News.

It’s pretty tough to see myself as relaxed as Thomas More who joked with the guard just before the axe removed his head, or riding joyfully with St Ignatius of Antioch to be devoured by the lions in the Colosseum, but Jesus is the Way and he asks me to place my life in his care, seeking what really matters, seeking his mercy. He’ll take care of the rest. St. Catherine of Siena tells us, “All the way to heaven is heaven because Jesus said, ‘I am the Way’.”

To reflect on the short trip down the runway before liftoff as Cardinal Collins described our brief life here on earth is a beautiful way to live in virus time and all the time. St John Vianney can help us:

To be loved by God,

To be united with God,

To live in the presence of God,

To live for God.

Oh! What a beautiful life

And what a beautiful death.