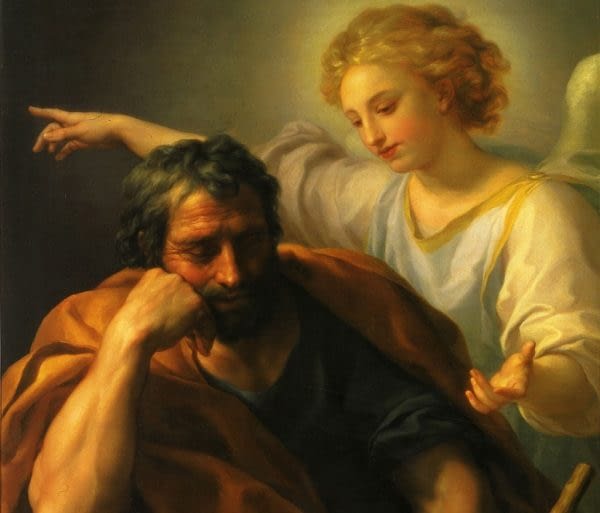 Posted in CHRISTMAS, and JOSEPH

Let’s not forget Joseph. So, what better days for putting him in the spotlight than Holy Family Sunday and his feast day March 19. The readings for Holy Family Sunday highlight God’s holy order for mother, father and children concluding with Joseph leading Mary and Jesus away from danger, the first attempt to annihilate Christ. Joseph is called to the rescue.

Although Mary gets the most important role in God’s incomprehensible plan of salvation with Gabriel telling her that she will conceive as a virgin the Son of God, Joseph isn’t just an add-on to make this arrangement a family. His call to be Mary’s husband is crucial to Jesus becoming fully human and fully Divine.

Joseph was asked above all to be silent. I believe he had a monastic heart of silence, attentive to God’s Word. Unlike his bride, Joseph was conceived like the rest of us with the effect of original sin. God trained Joseph with His intimate Love.

It’s interesting that Mary had the angel Gabriel appear to her so that she could converse with him while Joseph had angels appearing in his dreams. There’s a big difference there showing the level of trust in God he had, developing most likely from previous encounters through his early youth.

Joseph was the first in the family to face crushing misfortune when he learned about his beloved’s apparent betrayal. God could have prepared him for this in a smoother way, but chose instead to call him through the purifying fire of anguish. This was Joseph’s moment to show his fidelity to God not to Mary, similarly like Abraham with Issac. Because Joseph loved God above all else his love poured forth to Mary when he protected her from the shame and harm of the Law by divorcing her quietly (Matthew 1:19).

Joseph probably knew the Book of Ben Sira (Ecclesiasticus), perhaps even had his attention drawn to it by God in order to prepare him for this trial.

My child, when you come to serve the Lord,
prepare yourself for trials.
Be sincere of heart and steadfast,
undisturbed in times of adversity.
Cling to him, do not leave him,
that you may prosper in your last days.
Accept whatever happens to you;
in periods of humiliation be patient.
For in fire gold is tested, and the chosen,
in the crucible of humiliation.
Trust in God, and he will help you;
make your ways straight and hope in him.
(Sirach 2:1-6).

The Gospel doesn’t give us details of Joseph’s dream in which he’s given the go-ahead from an angel to take Mary to be his wife. Nor do we have his thoughts that raced through his mind when he awoke. I like to compare “appeared to her” and “appeared to him in a dream”.  In both appearances, angels speak but if I had my choice I’d go for the appearance way if God had something really important to tell me. So, I really admire Joseph’s trust.

Joseph has three other dreams. The first happens after the wise men leave Bethlehem. An angel tells Joseph to take Jesus and Mary to safety in Egypt away from Herod’s rage. The second happens after Herod died. An angel tells him to head to “the land of Israel.” On the way or while there Joseph grows fearful for his family’s safety when he learns that Herod’s son is now ruling Judea.

Joseph isn’t sitting around waiting for angels, he’s watchful, praying, and guarding his family in the incomprehensibility of God’s plan, all the while steadfast, trusting, and clinging to God as he has learned to do. God has prepared Joseph for this. Joseph is a man of unwavering trust and love.

Consider the generations long past and see: has anyone trusted in the Lord and been disappointed? Has anyone persevered in his fear and been forsaken? has anyone called upon him and been ignored? (Sirach 2:10)

God sends an angel in another dream. He finally goes to Galilee to settle in Nazareth where he can build a home for his beloved wife and Jesus.

Let’s not forget Joseph. A man of great prayer, trust, and love who has suffered and faced threats to his family needed God’s extraordinary help and intervention. God the Father calls those of us who are fathers to the same life of prayer, trust, and love. Every family has God’s incomprehensible plan of salvation underway within its joys and sorrows.

When we, fathers, cling to Jesus in our helplessness, with cries of silent longing even in the face of crushing misfortune within family life we will be helped. In fact, we will be given a profound awareness of God’s faithful love and care for those we love. We will never be disappointed.

Here’s a word I like to read often from St. John Chrysostom:  All things will certainly turn out, whether in this life or the life to come. In every circumstance, yield to the incomprehensibility of God’s providence.

Like Joseph, we may not be given what we expected for family life, but through our faithfulness to the one whose kingdom we are destined for, we will see him protecting our family and all those we love in his mysterious plan of drawing all who belong to him toward the eternal City of God.