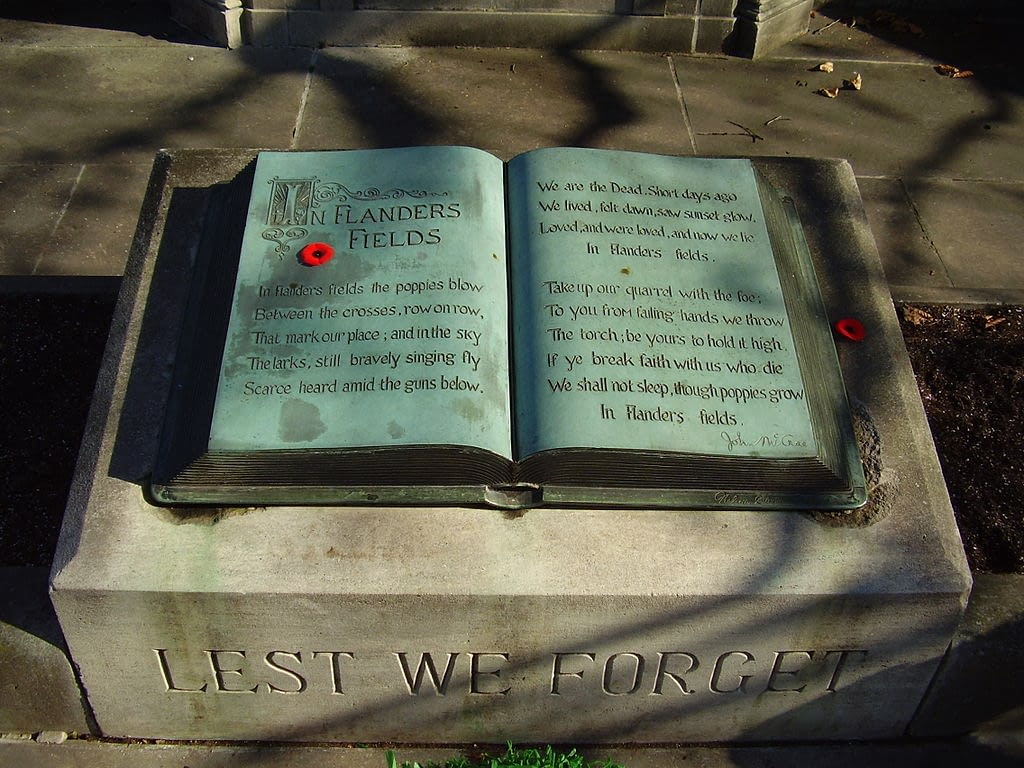 What is the purpose Of Remembrance Day?

Posted in LIFE IN CHRIST

I’ve attended Remembrance Day services as a student then as a teacher for thirty-one years. With time the number of living veterans decreased steadily. Most of them are in their nineties now, so their voice will one day be gone reminding us to remember. Remember what?

One Remembrance Day had an impact on me when I invited a Polish veteran to speak to my grade 7&8 class in Wilno, Ontario.

He told us that Remembrance Day is becoming more focused on world peace and avoiding the horror of war. Following his vivid description of the tragedies of war, he told us why he fought in World War II. The defence of freedom and democracy were his two main reasons.

We’ve all heard and seen, “Lest we forget,” the call to remember those who died in World War I and II sacrificing their lives for freedom. In Canada, for example, Veterans Affairs states clearly on their website why we need to remember:

“If we do not, the sacrifice of those one hundred thousand Canadian lives will be meaningless…We often take for granted our Canadian values and institutions and our right to live under a government of our choice. The Canadians who went off to war in distant lands went in the belief that the values and beliefs enjoyed by Canadians were being threatened. They truly believed that “Without freedom, there can be no ensuring peace and without peace no enduring freedom.”

Does anyone remember the “war effort,” the term my parents used when I was a kid 58 years ago? The global coordination of military resources to fight an enemy’s takeover of the world is getting a bit elusive.

I was born in British Guiana. Two of my Uncles travelled to England to fight, one as a Commando, the other in the navy. That military history and meeting Polish veterans gave me a strong awareness of the allied war effort.

Most of my students had a vague idea that the bad guy lived in Germany, and his name was Hitler. So teachers have to do some teaching before November 11. The Royal Canadian Legion, in sync with the Poppy Campaign, provides schools with a terrific learning package and a contest for students to write or draw their creative best images of Remembering.

Now that I’m retired, I wonder if anyone knows what November 11 is all about. Lots of facemasks, but very few poppies. All Canadians should know what happened to Don Cherry last year following his annual rebuke to those who don’t wear poppies.

Do we need to remember?

Of course, and as the two wars drift further back, we need to learn why.

The “values and beliefs enjoyed, and the government of our choice” were radically different to those of today’s so-called free world, which pose a far greater threat to life at every stage than the “enemy” of World War II, the deadliest conflict in history with over 70 million deaths in six years.

Remembering the cost of that war through learning and wearing the outward sign of a poppy will lead us to prayer, especially for those souls who died.

Remembering will also help us to pray in our wartime characterized by the attacks of an unseen enemy. It is through prayer that we will be able to win the victory for true freedom, which has already been won by Jesus Christ.

For our struggle is not with flesh and blood but with the principalities, with the powers, with the world rulers of this present darkness, and with the evil spirits in the heavens. Therefore, put on the armour of God that you may be able to resist on the evil day and, having done everything, to hold your ground. (Ephesians 6:12-13)

Should World Peace Be Part of Remenbrance Day?

There is room in our November 11 remembrance to contemplate true peace in our world where armed conflict is not an option. While this is not the focus of Remembrance Day, it must have a place of honour.

St John Paul II addressing a delegation of Canadian war veterans in 1991: …we are constantly reminded how fragile are the institutions which ensure peaceful relations between peoples who, with the onset of freedom, are also rediscovering ancient hostilities and prejudices. Although – as you well know – individuals are capable of great and noble acts of service and human solidarity on the battlefield, war itself with its accompanying evils and sufferings is a reality which the human family is called to reject as a means of pursuing political objectives.